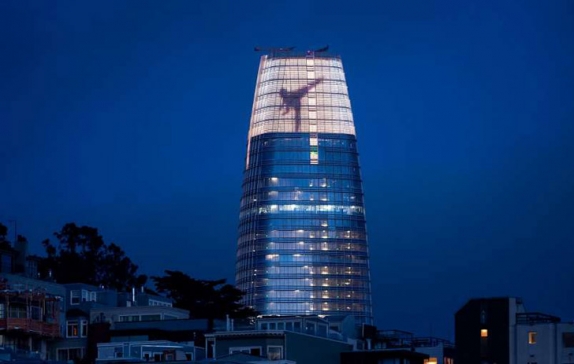 After years of anticipation and speculation, the public art installation crowing the top 9 floors of the 61 story Salesforce tower was finally revealed on May 22, 2018. Local resident artist Jim Campbell created a piece called “Day for Night”, which now boasts being the tallest public art installation in the US – and has forever transformed the San Francisco skyline. The work is visible for 20 miles in every direction. Video cameras have been strategically set around town to capture the life of the city during daylight, and then transmit that video imagery onto the tower that same night. The ever-changing display has been designed to show people dancing, street scenes, the crashing of waves at ocean beach, fog rolling in over the bridge, sunsets, and sailboats on the bay. Per Campbell “the sculpture is a visual diary of the San Francisco community, and just like life in the city every day will be different”.
On most nights the tower, which is affixed with thousands of softly lit low resolution LED lights turned inward, typically appears as a single blue color. The floors supporting the artwork are wrapped in over 130 individual aluminum panels. The components comprising the “Day for Night” work were installed directly onto these panels, with approximately 80 pixels bolted on to each piece of aluminum. In total over 11,000 LED pixels combine to create a massive 100- ft tall circular LED screen.
San Francisco’s planning code now requires a public art component for all new buildings, and mandates that developers spend at least 1% of their overall construction costs on public art. While the Planning Department still dictates the aesthetics of the city’s urban design, they have no oversight on the actual art - which was left up to the building’s owner, Boston Properties, and artist Jim Campbell to decide. As the piece is part of the San Francisco Art Commission’s commitment to public art, the installation will never be allowed to project advertising or messages.
James Campbell started his career as an MIT-educated engineer, originally working on high-resolution screen and television projects. In his spare time he began creating art in his Potrero Hill garage. He began using LED lights as a primary medium back in 2000. His custom electronic sculptures and installations have made him one of the world’s leading figures in the use of computer technology as an art form. Today,  Campbell’s artwork hangs in major museums worldwide. His public art has been installed in places like Grace Cathedral, the San Diego Airport (a 1000-ft ceiling sculpture), Dallas Cowboys Stadium, and Battery Park. Permanent collections are featured in the Smithsonian American Art Museum and The San Francisco Museum of Modern Art (SFMOMA).
A little over a year ago Salesforce Tower opened the 61st ‘Ohana Floor’ to the public. The Ohana Floor is an inviting open space to sit and talk while gazing down on both of San Francisco’s world-famous bridges from a never seen before vantage point. 50-person tours are available one Saturday a month by appointment.