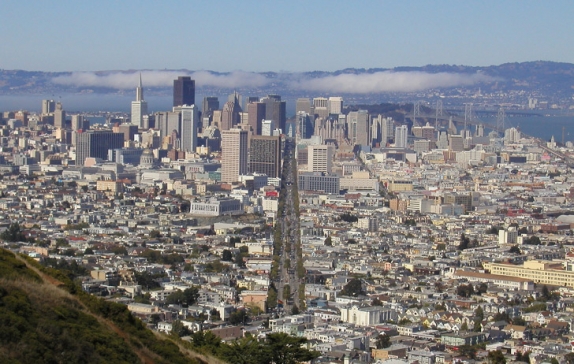 In the redevelopment frenzy of the 1950’s and 1960’s entire neighborhoods in San Francisco were being demolished in the name of “urban renewal’. In the 1970’s the San Francisco Redevelopment Agency was tearing down large swaths of San Francisco, mostly in the Western Addition and nearby Yerba Buena Center. Urban Renewal, a grand plan designed to rescue and modernize America’s cities, was instead decimating the centuries old urban fabric of San Francisco. Replacing well crafted buildings, for which San Francisco was famous, were faceless and soulless structures. The public, who had accepted the bulldozer with open arms up until the late 1960’s, began to realize that razing everything was probably not such a good idea after all.

Observing this plight long enough galvanized Charles Hall Page, principal and founder of Page & Turnbull, the Bay Area’s oldest architectural firm dedicated to historic preservation, to swing into action. In 1971 Page, along with co-founder Harry Miller (who held a Masters in Planning and a knowledge of how preservation had taken root in other iconic cities such as Savannah and Charleston), formed The Foundation for San Francisco’s Architectural Heritage. Fast forward 30 years later, this 501c3 non-profit organization is simply know as ‘Heritage’.

The (San Francisco) Heritage organization is now headquartered in the grand 1886 Queen Anne style Haas-Lilenthal House, located at 2007 Franklin Street. When Alice Haas Lilienthal passed away in 1972, the Russell-Shapiro & Rothmann families presented their family home to the Heritage Foundation as “a gift of the past for generations to come”. The .org’s mission is to “Preserve and Enhance San Francisco’s Unique Architectural andCultural Identity”.

Heritage now has a membership of over 2000 people. It was the controversy over and ultimate demolition of the City of Paris department store (now the site of Neiman Marcus) and the Fitzhugh Building (now the site of Saks Fifth Avenue) that swelled the ranks of Heritage’s membership and brought volunteers out in full force.

In an interview of Charles Hall Page conducted by David Roccosalva, associate principal with Page & Turnbull in February 2018, Page noted Heritage’s greatest success as the publication of Splendid Survivors: San Francisco’s Downtown Architectural Heritage, by Michael Corbett - which inventoried, classified & ranked San Francisco’s downtown commercial buildings. The book, in which buildings are rated form A (highest) to D (lowest) importance, has proven to be the biblefor the Financial District’s preservation. All of the buildings designated with an “A” ranking in Splendid Survivors have  been incorporated into Article 11 of the San Francisco Planning Code, requiring their preservation. Splendid Survivors had, and still has, a tremendous impact on public policy.

Although not necessarily eligible for Historic Landmark Designation, iconic bars and restaurants such as The Gold Dust Lounge, The Eagle Tavern, The Tonga Room at the Fairmont Hotel, Tosca Café, and Sam Wo have all faced threats of the wrecking ball. Heritage had responded by launching the Legacy Bars & Restaurants initiative www.sfheritage.org/legacy in 2013. This program includes a logo and window decal program, along with a free printed pocket guide. In 2015 Heritage & Heyday Books released the acclaimed book High Spirits: The Legacy Bars of San Francisco by J.K. Dineen.

HOW TO PREVENT WILDFIRES INSIDE AND...

HOW TO PREPARE FOR A WILDFIRE:...