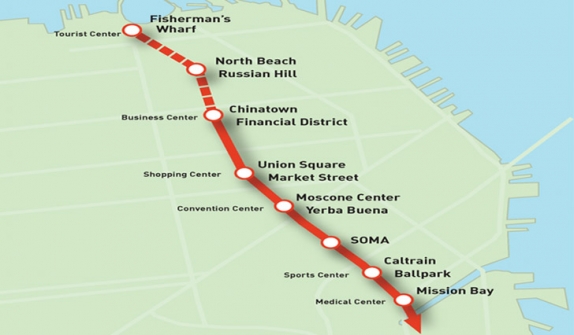 Nearly a decade ago the San Francisco Municipal Transportation Agency (SFMTA) began designing the Central Subway Project, which will extend the T Third Line underground from the Caltrain Station at Fourth & King Streets through downtown and terminating in Chinatown. When completed the subway will run 1.7 miles, ending 120 feet beneath Stockton Street at Washington Streets in Chinatown, and will server 35,000 new customers per day.

The project which has been under continual construction since 2011, and had been scheduled to be completed by the end of 2018. The subway, however, is now going to be delayed for approximately another year, with a revised estimated completion date of December 2019. The primary cause for the delay: the project contract that the MTA had signed with contractor Tutor Perini required the installation of high-strength steel rails for the budgeted $1.6 billion subway - however Tutor Perini and subcontractor Con-Quest Contractors (as a result of an MTA audit) were found to have installed only standard-strength rails. The contractor and subcontractor had laid about 17,000 linear feet of rail, all of it falling short of the MTA’s specifications. The rails needing to be replaced run in both directions from Fourth and King streets, along the surface of Fourth Street, to the subway portal beneath Interstate 80, then under Fourth and Stockton streets, passing beneath Market Street and stopping just short of Union Square (approximately 3.2 miles). In total, the completed project will require about 6.8 miles of rail: two rails per track in each direction.

MTA spokesman Paul Rose said the agency specified the use of high-strength steel because it has a longer expected life span vs. standard rail. Rose clarified “It is not a safety issue we’re concerned about, rather “It’s about how long the rails will last.”

The Central Subway extension was designed to connect major employment and population centers in San Francisco that have been underserved by rapid transit, including Mission Bay, Dogpatch, Bayview-Hunters Point & Visitacion Valley. Stops will include Moscone Center at Fourth & Folsom, Union Square at Stockton & Market Streets, and Chinatown at Stockton & Washington (providing relief to one of the most densely populated neighborhoods in the city).

Although the Chinatown Station will be the northern terminal of the Central Subway when it opens, the subway tunnels presently extend approximately one additional mile north of the Chinatown Station, to Columbus and Powell Streets in North Beach. These additional tunnels were constructed so that the tunnel boring machines (TBMs) used during project construction could be removed from the ground in an area where off-street space was available so as to minimize surface disruption.

No passenger service will be operated in the tunnels constructed north of the Chinatown Station when the CentralSubway opens, however, the city is already considering adding a station in North Beach, with the possibility of building extensions to Fisherman’s Warf, The Marina, & Presidio.

The city demolished the classic but decrepit Pagoda Palace Theater in 2013 to make an extraction point for the tunnelers. Beneath the circa 1909 building crews discovered the foundations of a church built in 1888 that was a casualty of the 1906 earthquake.

The SF Board of Supervisors wanted to rename the Chinatown Station after late Chinatown lobbyist Rose Pak in recognition of her support for the project and neighborhood, but SFMTA maintained that the station should be named strictly for their locations.

For more information on the Central Subway visit: https://www.sfmta.com/projects/central-subway-extension