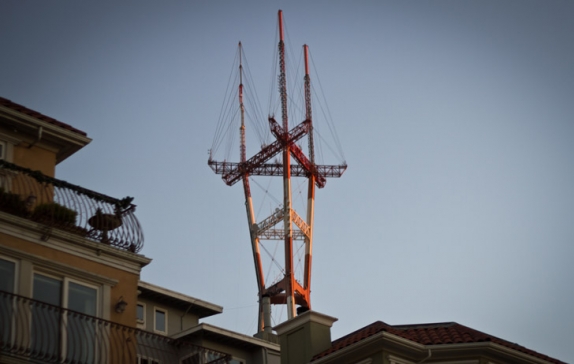 Back in 1932 Adolph G. Sutro III, grandson of businessman and former San Francisco mayor Adolph Sutro, built a mansion situated on 6 acres between Mount Sutro and Twin Peaks near Clarendon Heights referred to as La Avanzada. In 1948 the estate was sold to the American Broadcasting Company for use as a transmitter site for its new television station KGO-TV. In May of 1949, the station premiered producing its shows at the Sutro Mansion transmitting via a 508-ft broadcast tower. In the mid-1960s due to continual complaints of poor reception, a project was conceived to build a taller tower which would accommodate most of the radio and TV stations in the Bay Area. Two sites were considered, Mount San Bruno and Mount Sutro; the Sutro site prevailed as Mount San Bruno was too close to the airport.
After years of litigation and strong neighborhood pushback, the $4 million SutroTower project commenced in 1971, resulting in the Sutro Mansion being demolished. Completed in 1973, the 3-legged tower soared 977 feet into the air, 68% higher than the original broadcast tower. The tower was constructed of 3.5 million pounds of steel, is anchored by 15 million pounds of cement, and consists of 10,000 bolts and 30,000 fasteners. Until the Sales Force Tower was completed in 2018 the Sutro Tower had been the tallest structure in San Francisco.
Local residents opposed the tower even before it was completed, including the criticism of the aesthetic effect the tower would have on the rest of San Francisco. When first built, the long legs of the tower were illuminated with long white lights that looked like long fluorescent tubes. Public outcry resulted in the lights being removed soon after they were turned on. Despite the initial revulsion by some residents, Sutro Tower is now recognized as a Bay Area icon, appearing in movies and TV shows as an architectural symbol of the city.
The tower was originally painted red to make it more visible to pilots, however new warning lights on the tower and a change in aviation rules mean the tower no longer needs to be red. Due to neighborhood complaints that blasting and chipping off of old paint would shower paint chips onto nearby streets, painting has stopped on the entire structure, eventually causing the tower to turn to a uniform gray.
In 2009 the tower converted to all-digital transmissions and recently underwent a major overhaul. The tower is owned by Sutro Tower, Inc., which is owned by a consortium of the four major broadcasters in San Francisco at the time of its construction: KTVU, KRON-TV, KPIX, (now owned by CBS), and KGO-TV. Space is also leased to other radio and TV stations including PBS.
Whether you consider the tower an eyesore or an iconic part of the city’s skyline, Sutro Tower is here to stay. For more information visit Sutro Tower’s official website www.sutrotower.com.