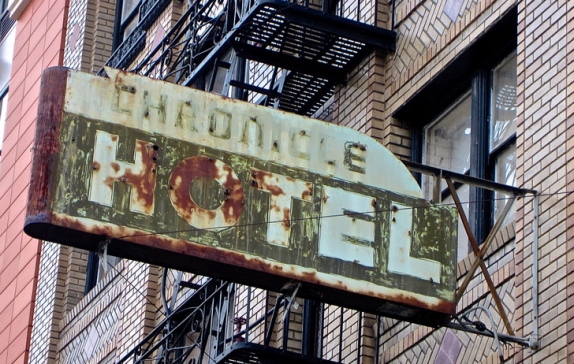 During the Gold Rush, the Tenderloin was alive with theatres, restaurants, hotels, and brothels. The 1906 earthquake and fire suddenly changed the dynamics of the neighborhood, with hotels being rebuilt closer to Union Square. From 1906 through the 1950’s visitors still flocked to the Tenderloin’s speakeasies, jazz clubs, billiard halls and especially gambling parlors.
In the mid-1950s, the city began cracking down on the Tenderloin’s quasi-legal businesses, bringing gambling operations to a halt – which resulted in radically slowing foot traffic to the area. In the mid-1960’s movie theatres and recording studios that supported the local economy started to close. Crime, prostitution and drug dealing filled the void. Many who were unable to afford a home elsewhere in the city found affordable housing in the Tenderloin’s old hotels that had been repurposed to Single Room Occupancy (SRO) – a room with a sink, shared bathroom down the hall, and no cooking facilities.
In the 1970’s significant redevelopment efforts were underway in the Western Addition and Yerba Buena neighborhoods. Fearing that their neighborhood was next, Tenderloin residents began to organize to try and stop similar gentrification in their part of the city, and seem to have succeeded to date.
There are specific policy reasons that the Tenderloin has continued to remain relatively affordable. 40 years ago, large swaths of the neighborhood’s buildings were acquired by non-profits for low-income housing when the cost of real estate was still cheap. In 1985 the area was re-zone to prevent any building over 13 stories – preventing luxury high-rise condo developments and hotels from spilling over from Union Square. Non-residential use above the second floor is also specifically regulated. The city has made it very difficult, if not impossible, to get rid of SROs – which exist primarily in the Tenderloin and nearby Chinatown.
With all of this housing stock protected for low-income residents, it is unlikely that the prime location in the center of town will ever become gentrified. Further exacerbating this issue is that many of the buildings from Union Square to Civic center are now classified as ‘historical’. The Tenderloin’s long-standing problems of violent crime, drug dealing, and homelessness have actually gotten worse over the past 10 years. City officials are actively trying to deal with the situation by increasing police presence, installing more street lights & street clean-up squads – but don’t expect a major change in the area any time soon.