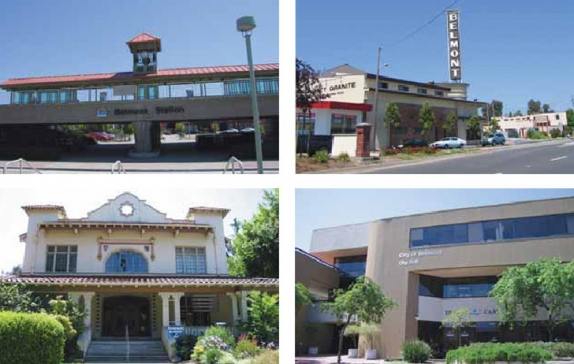 Belmont, meaning “beautiful mountain” in French, is a peninsula community halfway between San Francisco and San Jose. Situated primarily on the hills overlooking San Francisco Bay and the coastal range, the area is abundant in trees, vast canyons and gorgeous wooded hillsides. Homes are nestled throughout, reflecting a solid residential base. Belmont is a quiet residential community in the midst of the culturally and technologically rich Bay Area.

Belmont encompasses a land area of approximately 5 square miles bordered on the north by San Mateo, south by San Carlos, east by Highway 101 and west by Highway 280. Elevation is 10 feet to 750 feet above sea level. The city is within easy driving distance of the Pacific coast, three major airports, and major employment centers including San Francisco, Silicon Valley, and the East Bay. Since its incorporation in 1926, Belmont has grown from a small town of less than 1,000 residents to a community of over 26,000.

Much of the City’s population and housing growth occurred during the 1950s and 1960s during the post war periods. Most of the neighborhoods are found on the hillsides with many open spaces and parks. There are excellent private and public schools with high test scores, and the only university in San Mateo County—Notre Dame De Namur. The downtown has easy  access to freeway and rail transportation and is a mix of locally owned shops and other commercial uses.

Belmont has 13 churches, a branch of the County Library, service by 6 newspapers, over 60 radio station and sundry television stations. Recreational facilities include 10 park/playgrounds.

Belmont has a rich heritage of fine homes from the turn of the twentieth century. During the late 1990s housing demand increased dramatically, in large part due to the growth of the nearby headquarters of Oracle Corporation. A wide variety of types of affordable housing exist in Belmont, including senior housing, family housing, student housing, rental housing, and housing for the disabled. Belmont continues to enjoy the security of a very low crime rate, less than one-fifth the national average.

The community’s demographics have not changed appreciably since the 1990s, in contrast with other parts of the Bay Area. As with other communities in San Mateo County, the population is slowly aging and the percentage of Asians and Pacific Islanders is increasing. Belmont remains primarily a residential community.

Approximately two-thirds of its developed land is occupied by housing, with single-family homes representing 64 percent and multi-family units representing 36 percent of the housing stock. Median sale price of a single family house during the first quarter of 2016 was $1,462,500.

The community is approaching build-out, and has a limited amount of land available for future residential development. Some vacant residential lots exist in the hillside neighborhoods. There are also substantial opportunities for revitalization and redevelopment of sites in the small Central Business District and along the major commercial arterial, El Camino Real. The City is working hard to facilitate mixed-use projects that will add to the vitality of the Central Business District; those projects will incorporate some aff ordable housing units.