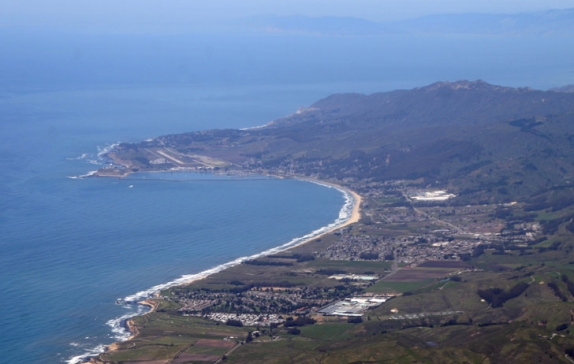 Half Moon Bay prides itself on being one of the oldest community settlements in San Mateo County. Originally inhabited by the Costanoan Native Tribe, the area was settled by westerners after the Mexican government began issuing land grants in the 1840s. The community began to blossom during the Gold Rush, when settlers from different cultures began settling the land, forming a true community. The community was originally known as San Benito, and then Spanishtown, before being renamed to Half Moon Bay in 1874. By that time it had established itself as a solid farming and agriculture community.

At first, growth of Half Moon Bay was slow, even with the construction of the Ocean Shore Railroad in 1907. During the Prohibition Era, Half Moon Bay became popular to local moonshiners and Rumrunners from Canada due to the thick fog and hidden ocean coves that allowed for them to conduct business without threat of persecution. After WWII, Half Moon Bay steadily grew until its incorporation in 1959.

Half Moon Bay prides itself on being a close-knit, rural coastal community. It would be quite uncommon to drive into to town and not be able to find at least one thing going on. Several annual local events that occur in Half Moon Bay include the Fourth of July parade and block party, summertime farmers’ markets, and the famous annual Pumpkin Festival.

Along with agriculture and commercial fishing, a bulk of Half Moon Bay’s economy comes from tourism, so locals often go above and beyond to make sure that a visitor’s stay is a wonderful one. Those wishing to visit the Half Moon Bay Coastside will find no shortage of activities, food options, and shopping experiences. Visitors can engage in more adventurous activities, such as whale watching, sport fishing, and water sports, or kick back and relaxby visiting a spa or playing a round of golf. For more leisurely activities, picturesque Main Street offers a variety of shopping and dining options for any desire. There is also an almost endless choice of dining options along the coast for those that prefer beachfront dining.

In 1907, the Ocean Shore Railroad was constructed with the intent of opening up access to San Francisco. Construction had been delayed due to the 1906 earthquake the year before. It ran until 1920, when it ceased operation due to financial troubles and the construction of the Pedro Mountain road in 1914. Currently, SamTrans provides public transportation access throughout Half Moon Bay, but since 85% of residents work outside of the Coastside, most residents commute by car. There is also a small plane airport that offers service from Moss Beach.