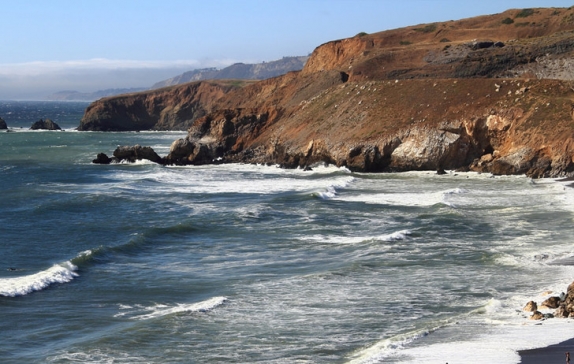 Now a cozy city with a small town feel, Pacifica once served as one of the first points of contact for the 1769 Bay Area Expedition led by Gaspar de Portola. Upon discovering that the land was fertile and perfect for farming, immigrants from Ireland and Italy began to settling in the area.

Over the course of the next century, development of the land was slow, until the early 1900s, when the now defunct Ocean Shore Railroad began to attract several small settlements around each station. Ray Higgins began to develop the area, eventually building many homes, as well as a school. With the end of World War II, more developers began to arrive in the area, and a building boom resulted in thousands of more homes being built, and several more communities being established.

Pacifica can be described as a city that feels like a small town, where everyone knows one another. Community plays a huge part in The City’s identity. There are countless organizations, clubs, and programs that residents can get involved in. These organizations include the Amateur Radio Club, Pedro Point Surf Club, and Friends for Youth; a service that offers mentoring to young people. Residents are also able to join Pacifica’s Environmental Family – an organization that gets residents involved in the environmental preservation and restoration.

The City does a fantastic job at keeping its members informed and involved with what is happening in the city. On its website, Pacifica has an informational guide with all of their current issues for residents to view. Pacifica also hosts citywide events throughout the year, such as art workshops, jazz festivals, and even Tarot Thursdays (held on select Thursdays at Grape in the Fog).

Residents and visitors, especially outdoor lovers, will never run out of things to do in Pacifica. Pacifica boasts an impressive 15 parks within city limits. Pacifica is also home to three beaches: Pacifica (Linda Mar) State Beach, Sharp Park Beach, and Rockaway Beach, the latter two of which are dog friendly. Surfing is and extremely popular pastime in Pacifica. Surfing of all levels can be seen taking place at Pacifica State Beach, while surfing at Sharp Park Beach and Rockaway Beach tends to be reserved for more advanced surfing.

For hikers, Pacifica leaves very little to be desired. There are four main trail heads in Pacifica – The Golden Gate Nation Recreation Area, Mori Point, Sweeney Ridge, and Milagra Ridge. Each trail offers spectacular views and hiking for all ages and experience levels.

For families looking to make Pacifica their home, they will find a wonderful school system. There are nine schools that are within the Pacifica School District. These include two K-5 schools (Sunset Ridge and Ortega), five K-8 schools (Cabrillo Elementary, Linda Mar Educational Center, PSD Home School, and Ocean Shore School), and one middle school (Ingrid B. Lacy Middle School). There are also two high schools within the city limits – Oceana and Terra Nova.