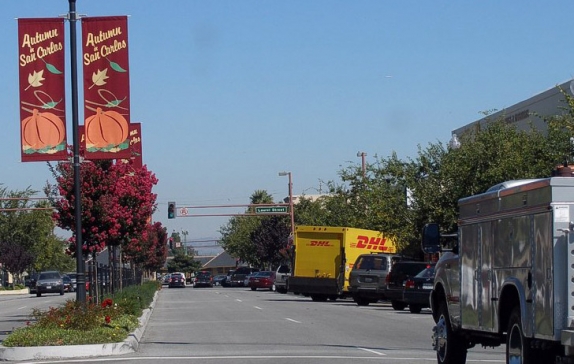 The City of San Carlos has a population of 28,406 and covers an area of 5.1 square miles. San Carlos’ official slogan is “The City of Good Living.” With a quaint, small town feel and a tight-knit community, this city certainly lives up to its slogan.

The City of San Carlos has a rich history. First settled by the Ohlone Native tribe, the area was later divided into Spanish land settlements, or “ranchos”, in 1769. The land occupied by modern day San Carlos was a single, large rancho deeded to Don José Darío Argüello. The Argüello family was able to keep their land after the land transfer to the United States Government. They began selling parcels of it in the 1850s, after the gold rush brought the first nonSpanish western settlers to the area.

Large parcels were sold to the Brittan, Ralston, and Hull families, and also to Timothy Guy Phelps. Development of the area was slow; early attempts at land development were made by Timothy Phelps, but were largely unsuccessful. Phelps then sold most of his land to Nicolas Smith’s San Carlos Land development company. Growth of the area still continued slowly until the 1920s when Frederick Drake purchased 130 acres of land and began marketing it. San Carlos was incorporated in 1925.

A great community is what can truly transform a city from a place to live to a hometown. San Carlos exemplifies that close community feeling quite well. There are numerous ways to get involvedin the community. The recreation center offers many programs, clubs, and  classes to join throughout the entire year. Well established clubs such as the 4H club and the Kiwanis club give people the opportunity to get involved in extracurricular activities while being involved in the community as well.

Those looking for entertainment would find no short supply in San Carlos. At any given time, there are a plethora of things to do around the city. On downtown Laurel Street, one can find anything including a multitude of popular restaurants, shopping, and even a park! The Hiller Aviation Museum also offers afun, educational experience for the whole family. Hometown Days and The Art and Wine Festival, hosted in May and October respectively, are both extremely popular events in the San Carlos.

San Carlos also has an abundance of recreational spots. There are 15 parks in the city, including the popular Burton Park. There are also two trails within the city—Big Canyon Trail and Eaton Trail. For kid friendly fun, one can visit the San Carlos Youth Center located near Burton Park.

San Carlos offers many options for public transportation. One of these is the San Carlos Airport—T a community airport that houses over 500 small aircraft, used mainly for general aviation. San Carlos is also home to a Caltrain station located downtown, providing easy travel to San Francisco and San Jose or anywhere in between.