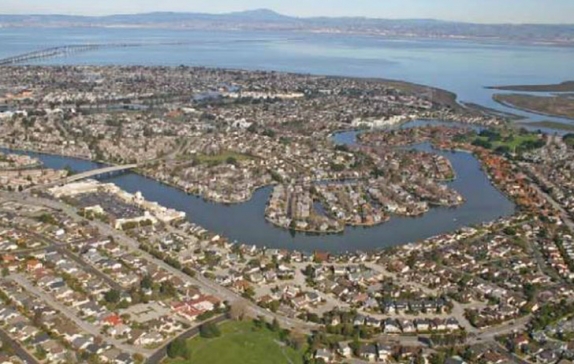 In 1958, real estate developer T. Jack Foster Sr. and his sons embarked on an ambitious project to build a planned community on land reclaimed from the San Francisco Bay. Today, the City of Foster City is home to nearly 30,000 residents and is one of the most successful planned communities in the United States.

Foster City is unique in that it is a “living history” dating back to a time that is still etched in many peoples’ minds. Foster City was created from what was once tidal salt marshes. By 1898 levees turned these salt marshes into Brewers Island, used for cattle grazing and salt ponds. By 1971 it was incorporated.

Over a period of 6 years during the early 1960s, Foster had 14 million cubic yards of material pumped in from the bottom of San Francisco Bay to raise the elevation of Brewers Island up from sea level to an average of 4-7 feet. To solve flooding problems on this low-lying land a central lagoon-like drainage basin was placed in the middle of the City. Now, if ever needed for flood protection, lagoon water can be pumped back into the Bay at a rate of up to 250,000 gallons/ minute. As a bonus the lagoon greatly enhanced the attractiveness of Foster’s new city.

Unlike most cities which grow helter skelter, Foster City is a master planned community. Therefore, provisions were made from the start for plenty of parks with a focus on the maintenance and appearance of both private and public property. The end result is today’s beautiful and liveable city. The median price of a single family home in Q1 was $1,542,500.

Weather is usually excellent, often Mediterranean resort-like. Summers are dry and warm with the average maximum temperature in July of 80.8 degrees. Winters are mild but cooler and wet. The coldest month, December, has an average minimum temperature of 38.6 degrees. The wettest month is January with an average rainfall of 4.20 inches.