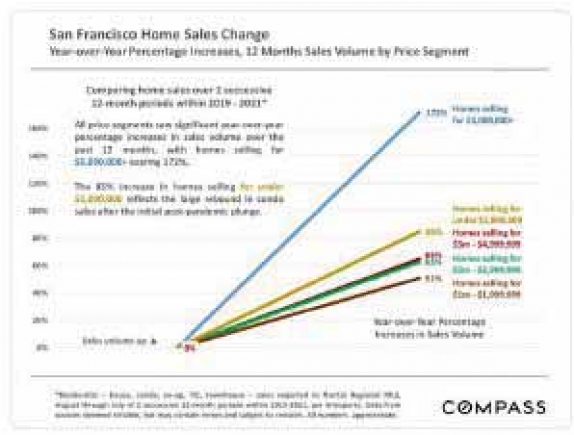 Abnormally high household movement occurred due to pandemicrelated, population-density reasons, housing and living costs, family and quality of life issues, and new wealth – moves greatly enabled by work-from-home. There was a considerable increase in the number of buyers for first homes, larger homes and especially luxury homes. Sales of homes over $5,000,000 in San Francisco shot up a whopping 172%. Due to Covid and its resulting population density issues, house prices are well up, condo prices are on the rise (after initially plunging after the pandemic hit), and rents, which make up the majority of San Francisco housing, had fallen significantly.

New wealth: Federal and state governments shoveled trillions of dollars to businesses and households, many of which were in no financial distress. Financial markets soared, dramatically increasing the wealth of middle class and more affluent households. And home values climbed. These factors contributed to the sense of being wealthier than ever, which helped supercharge the housing market. The households which did suffer financial hardship were generally less affluent, and more likely to be tenants than homeowners or home buyers: The misfortunes of lower wage earners in the hospitality and restaurant sector, coupled with the work-from-home policies of high-tech companies deeply impacted the San Francisco rental market, though it too became to recover since the rollout of vaccines.

Interest rates: The Fed implemented policies that brought mortgage interest rates down to historic lows, significantly lowering housing costs, and motivating perspective buyers to buy sooner rather than later. The risk is that if interest rates jump, perhaps due to inflationary pressures, it could have a pronounced cooling effect on the market, as it did in mid to late 2018.

Optimism boosts housing and financial markets: Markets typically move in cycles characterized by pervasive economic optimism – or conversely uncertainty or pessimism. Today, optimism generally prevails among those with financial resources. Because there are so many economic, political, and ecological factors at play any given time, it is extremely difficult to predict timing, duration, or magnitude of market cycles up or down.

Demographic Shift: According to census data, many more less-affluent/less educated residents left California than had arrived in the 10 years preceding 2019. To the contrary, more higher-income/more educated residents arrived in California than had departed. Out-migration accelerated in San Francisco since Covid hit, especially of less affluent residents where unemployment hit lower-wage jobs the hardest - although departures by affluent households seeking less densely populated locations offering such amenities as large backyards or swimming pools also occurred. In spite of the exodus, San Francisco saw heightened demand for single family homes that offered more living space, yards and decks or proximity to parks. Affluent and very affluent buyers began competing for an inadequate supply of inventory, resulting in bidding wars and sales well over the asking price.

The condo market began a very dramatic rebound, as many buyers that were outbid on single family homes found condos a much better value and far more affordable. Continued strong demand from buyers, combined with historically low interest rates and depleted inventory, will continue to boost home values in the Bay Area for the foreseeable future.